Pentewan is a small village with the remnants of an old harbour and a magnificent beach. It has a wide range of facilities and things to do within walking distance. Pentewan valley is known for its campsite and for hosting a mini festival, the Riviera Run, for car enthusiasts.

In summer, the place has a buzz and positive energy. Dripping ice creams, beers on the beach, children playing. It is of course very much a tourist location and has been very developed compared to other local beaches. The advantage of this is that if you’re staying there for a week there is plenty to do. It is not a wild camping resort despite being close to the beach and for those that seek more privacy and a more ‘back to nature’ feel may prefer smaller sites. What’s really unique about Pentewan is the way it has both a good beach and a good forest trail right next to each other. King’s Wood is collectively owned by the people of St Austell in a trust and is really pleasant for cycling and walking. Then a few minutes away you’re on a sandy beach. 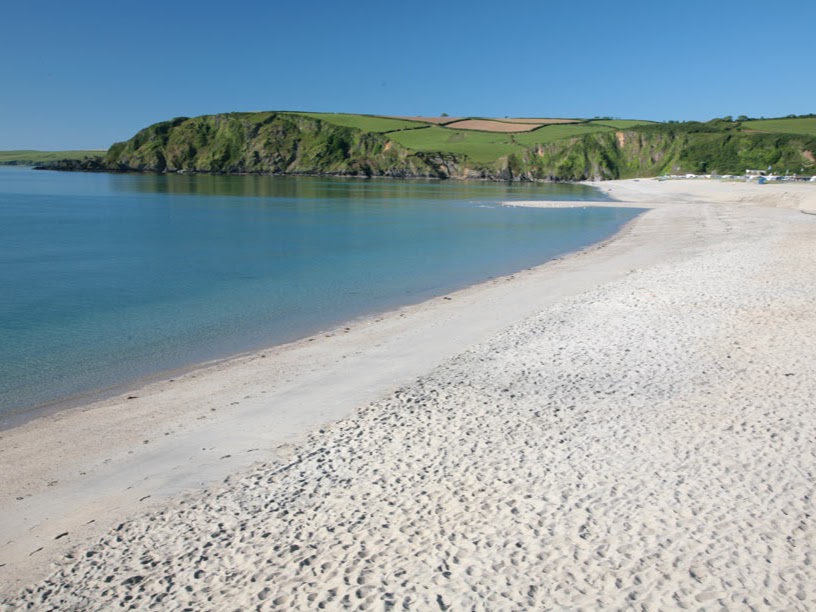 Pentewan has an expansive white sand beach nestled between two cliffs, which keep the beach sheltered. The beach is about half a mile long and is mostly flat, meaning it is far larger at low tide. The beach is also very clean and well maintained by its owners, Pentewan Sands campsite. Despite being popular, it never feels that busy due to the size of the beach. This is good for those that want to avoid the summertime madness of the North Coast. Surrounded by an Area of Outstanding Natural Beauty, Pentewan beach feels unspoiled despite its popularity. Pentewan is typical of St Austell Bay in that it’s calm, sheltered and safe. It’s excellent for swimming and is suitable for paddling with kids.

The beach is inseparable from the campsite that sits on it, which means it has excellent access to facilities. The campsite of course has toilets, as does the water-front Hubbox Restaurant for customers only. Hubbox is a burger and hot dog bar (which has the most delicious crispy sweet potato fries ever) served right on the waterfront. You can eat outdoors with your toes in the sand and your hands around a double-stack, American-style burger made with local meat.

The Seahorse Center is a two floor building with two swimming pools, a jacuzzi and flume downstairs and a restaurant upstairs. There is also a children’s play area. One of the pools is heated and the other is slightly cooler for lane swimming. This means there is basically an adult only pool and then a mixed pool. 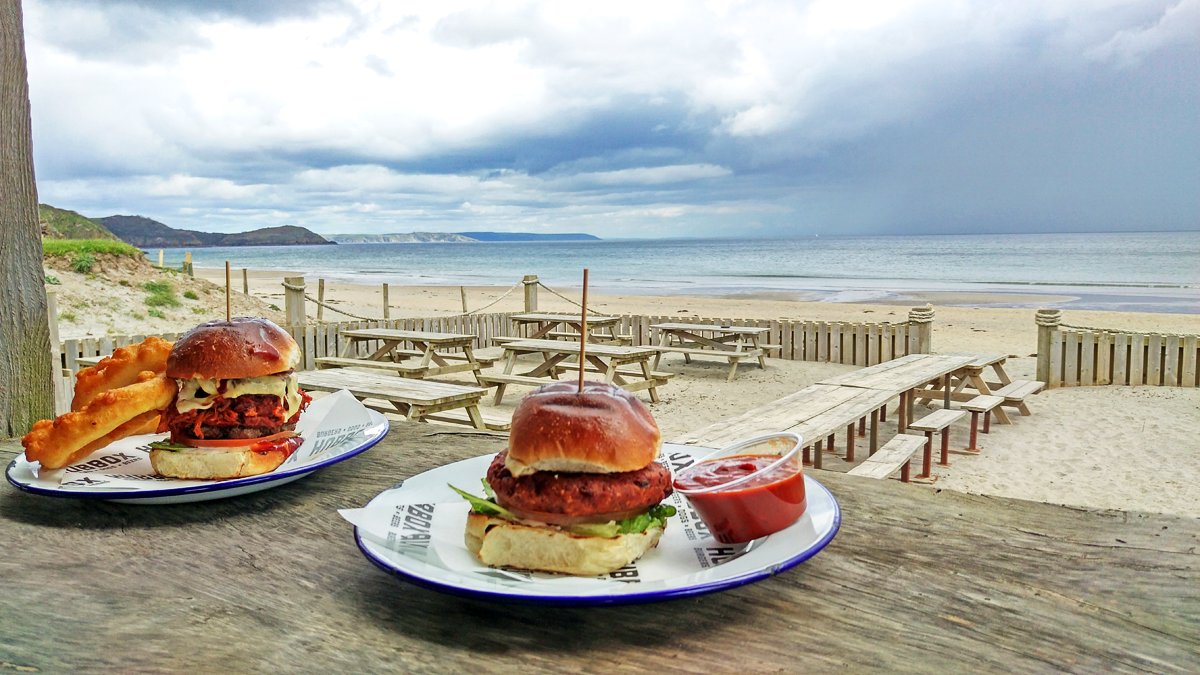 There is also a small shop on site, which sells daily essentials, gifts and tasty snacks. There are three car parks in Pentewan. The two that cost money are opposite the main entrance to Pentewan Sands across the road and outside the Seahorse center. There is a free car park inside the village itself but this is small and quite difficult to park in.

Inside the village itself is a quaint old square with the old water pump proadly kept. There is a really nice harbourside pub with a beer garden overlooking the bird sanctuary, which is what has become of the old port. There is also a cafe with lovely cake in the village and a small shop as well as a separate ocean sports shop where you can buy snorkel masks when you get here.

Just by the old harbour at the end of the beach you’ll find Pentewan Sailing Club. Formerly, the club met at Crinnis (now known as Carlyon Bay). The club is also associated with the local diving club. You’ll see the boats and windsurfers out in the bay and on a windy day the speed some of these guys reach is phenomenal.

Pentewan Valley Trail runs through King’s Wood and there is cycle hire available next to the bridge over the river. The cycle trail runs along the old train track and by the river. There are narrower, off piece trails through the woods which are bumpy with tree trunk roots throughout.

In the late 1700’s tin was mined, and Pentewan also produced a lot of stone which has been used in sites such as St Austell Church and Anthony House. Some of the tin miners believed the area to have been a home to ‘the old men’, as they discovered charcoal, human remains and the bones of unrecognisable animals.

In the 1800’s, Sir Christopher Hawkins developed the harbour and turned it into a major port, linked by trainline to mines to deliver coal to the mines and export clay. This is the harbour that is visible today. Two local aristocratic families called the Rashelighs and the Trefry’s, developed Charlestown and Par as ports. These neighbouring ports are very nearby and their superiority lead to Pentewan harbours demise. The last boat left par in 1940. In the 1960’s boats could still enter the harbour, but since then the harbour has silted up. 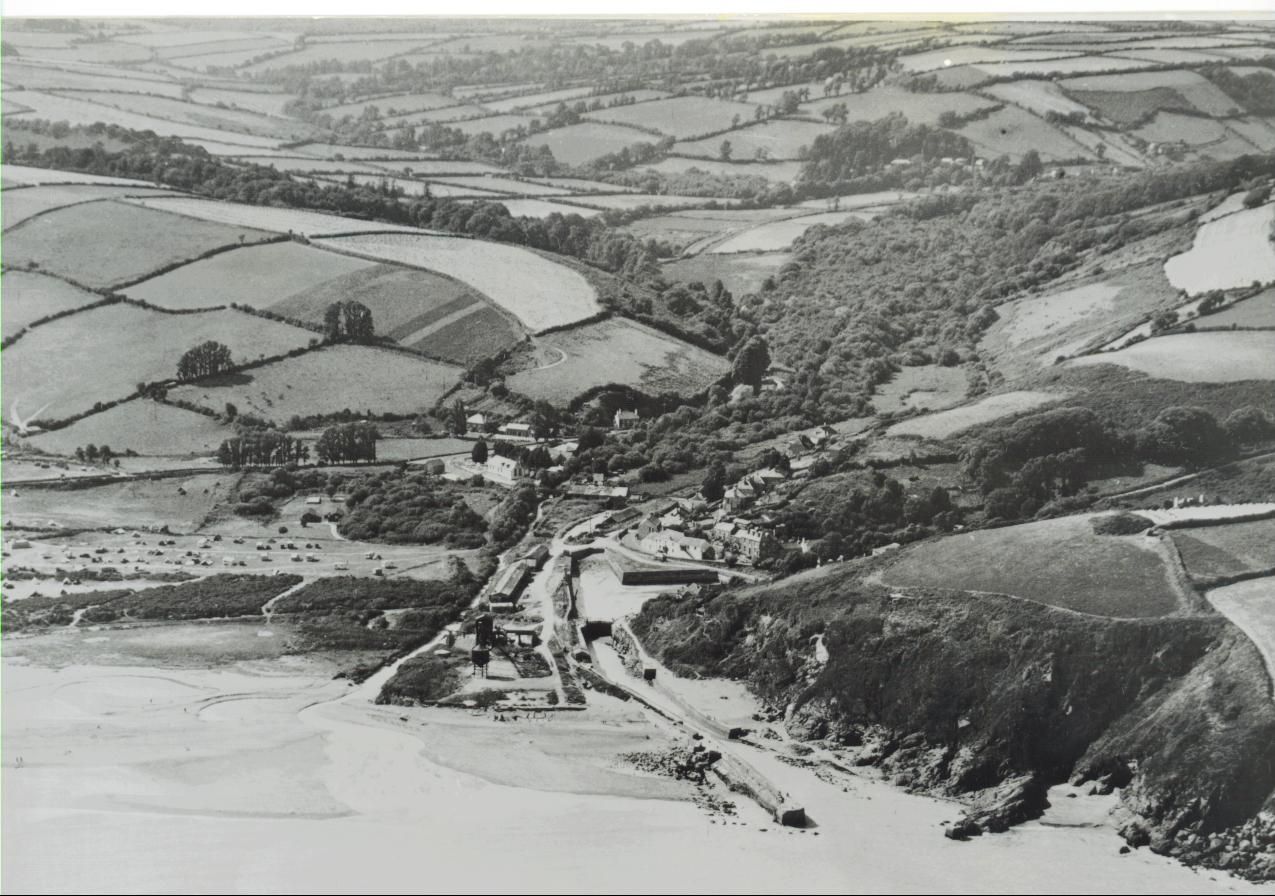 The beach is composed of the same sand that silted the harbour. It was created when sand, a byproduct of the mining industry, was carried down the river into the sea. Pentewan Sands is an accidental artificial beach! The river that leads onto the beach has been called White River and occasionally Red River because it used to be coloured by substances from the mining industry. Today, the beach is a tourism attraction and the old harbour is a bird sanctuary with a few golden Rudd in it.

Does Pentewan beach have lifeguards?

There are no lifeguards but there are lifebuoys and an emergency telephone on the beach.

The is a seasonal dog ban in place from 1st March through to 1st November. The beach is privately owned so check with Pentewan Sands for the latest rules.

There is easy, level access to the beach from the car park.