In a nutshell, the easiest day out from Mevagissey is the postcard-standard beach called Pentewan which is just around the coast. Gorran Haven has both a beach and a quaint village and harbour. Vault offers privacy  (it’s popular with naturists for this reason). The Charlestown beaches are mostly stony and there are many restaurants nearby. Portmellon is a short and easy walk from Mevagissey and has a similar character to its neighbour.

Does Mevagissey have its own beach?

Yes, Polstreath beach is situated just over the hill from Mevagissey, but it’s a steep walk up the coastal path and is difficult to access. The beach has a very long and steep set of stairs down the cliff face. The beach is rugged and has a wild, natural feel that many other beaches can’t boast and you’re allowed to bring your dog all year round. Get there early on a low tide and go for a skinny dip, there probably won’t be any one else around… 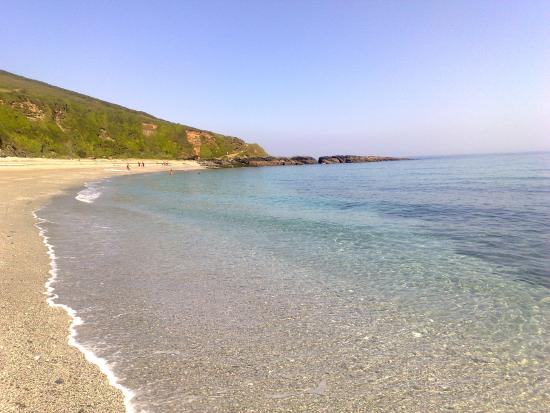 Vault is a shingle-covered beach that offers high levels of privacy. It’s accessible by the coastal path from Gorran Haven and the nearest car park is the National Trust Car Park a half mile away. A real Cornish gem, perfect for escaping the crowds. “It’s a great beach” – say all the locals 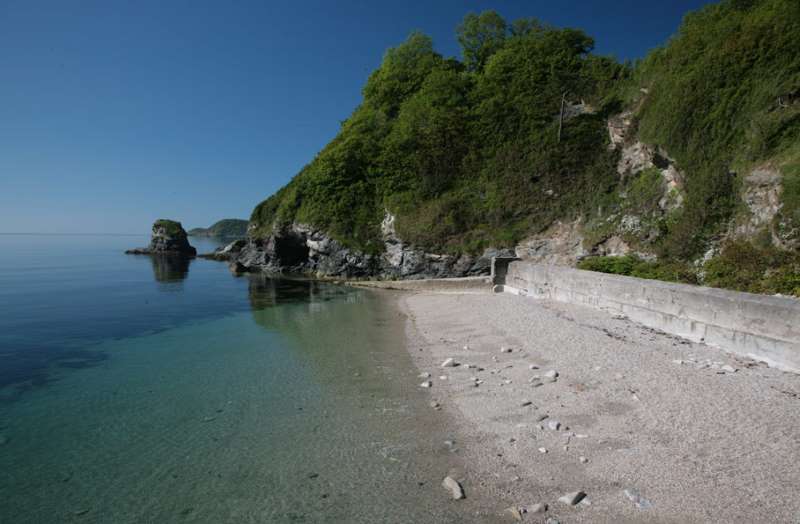 In Charlestown, the beaches are covered with flint; a remnant of a time when vessels would refill the clay boats with local rock to balance the weight of the boats and drop them off at Charlestown to be filled with clay again. Charlestown has a wide selection of good places to eat, and has wonderful views across the bay towards the headland. If you’re super fit maybe you can walk the coastal path to Mevagissey… 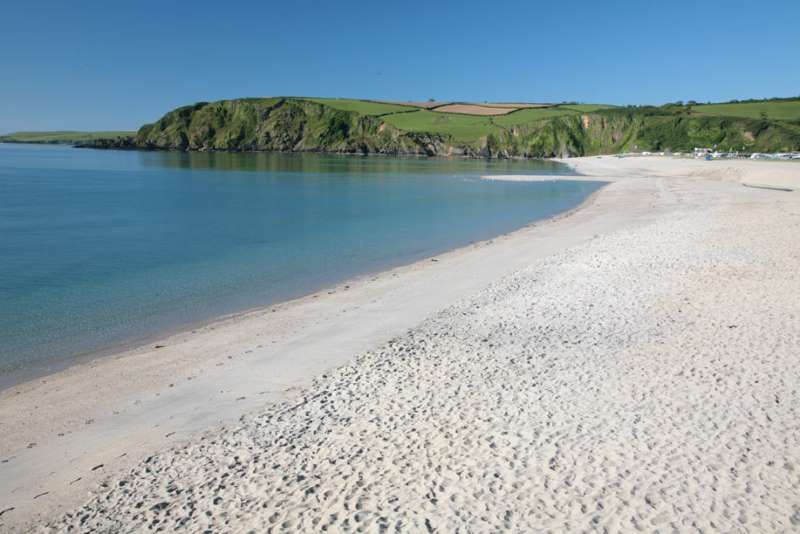 Just a few minutes away by car or a good walk around the coastal path is the beach of Pentewan. This beach is over half a kilometre long, with whitish golden sand. It has toilets and a restaurant on the beach as well as paddleboard hire, because just behind it is Pentewan Sands camp site. You can rent a floating banana and a boat and there’s free car parking and cafes in Pentewan village. 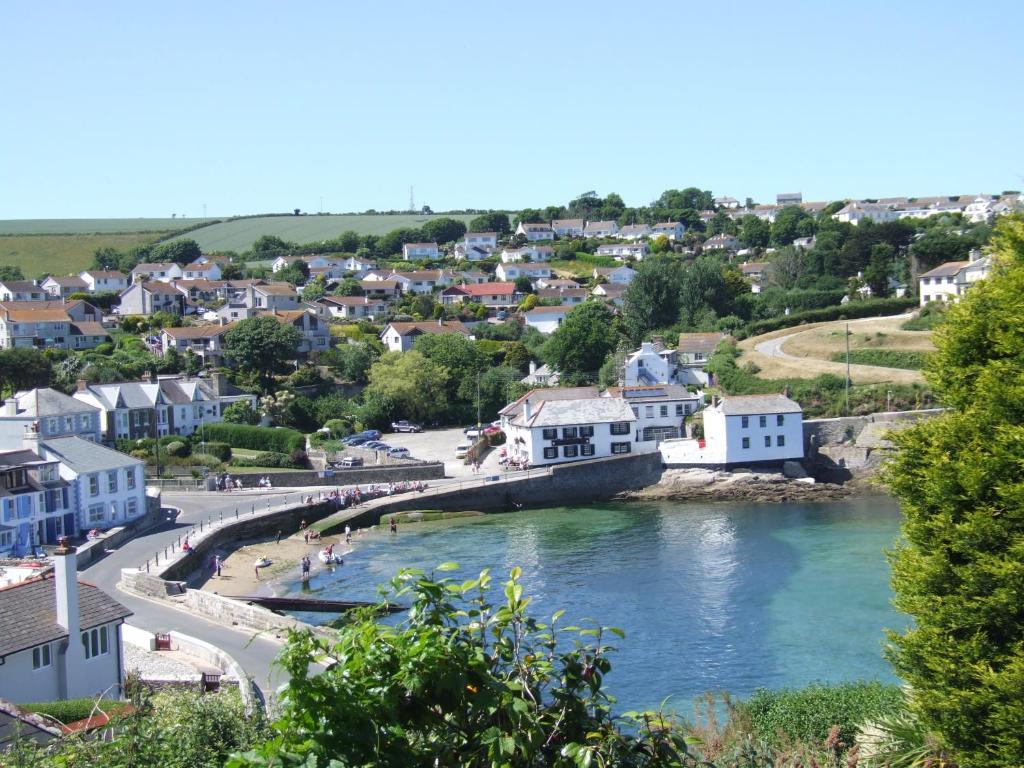 Portmellon is a small beach accessible at low tide. This is the beach nearest to Mevagissey and is only a short pleasant walk away – perfect for a shorter outing or for avoiding Cornish summer roads. A very safe beach and a great first-stop after visiting Mevagissey.

Distance from Mevagissey: 2.8 miles (13 minutes) Parking Score: 4/5 ‘An utterly glorious beach near Mevagissey with a wonderful coastal walk and shops.’

Oh, what a beautiful spot – Gorran Haven is a little village with a small harbour and a sandy beach. Compared to Pentewan, this is slightly further away, has less space, but is glorious all the same. Bear in mind that the beach is very small when the tide is in, so check tide times here before visiting:

Mevagissey is on the South Coast of Cornwall, just over one hour from Lands End, the very bottom of the UK. The beaches along the south coast are known for their outstanding quality. Cornwall is unique for it’s high exposure to the gulf stream.

Are Beaches Near Mevagissey safe? Yes, the beaches near Mevagissey are sheltered and safe for swimming, however very few have RNLA lifeguards, unlike the north coast. Water can get deep quickly in some places. It’s nothing like the North coast in terms of currents, but of course you should always be cautious with the sea, and don’t underestimate the power of surf. For details on how to call for help if you’re in trouble at sea, visit this site.

In summer water temperatures reach around 18 Celsius, and in winter the water can reach an icy 7 Celsius. The traveler in Cornwall enjoys warmer waters than those in the rest of the country by a couple of degrees (which makes a big difference), as the gulf stream brings water to us first, straight from Mexico! Wet suits are helpful in summer for milksops and namby-pambies, and in winter are a necessity unless you’re tough as nails. My advice is to get in quickly, preferably by running right in, and think of the word ‘refreshing’ rather than ‘cold’…

Get your bare buttocks down to Vault Beach or Porthluney cove – both are quiet and offer good privacy. The south coast is an excellent place for naturists, as it’s known for its numerous small coves which offer privacy.

Mevagissey is situated on the south coast of Cornwall, which is known for having more sheltered, quiet beaches than the North Coast, and the beaches are less well known for surfing. The fishing villages on the South Coast are more quaint for the most part, and Mevagissey is among the best of them. St Austell Bay has relatively small cliff faces and is really a series of little coves, whereas North Cornwall generally has larger, more expansive and more exposed beaches.

Beaches in Cornwall are glorious in all weather conditions. Whether there’s a cool mist lingering over the beaches at Charlestown or an azure sky over warm sand at Pentewan, you’re in for a treat. If the beaches near Mevagissey aren’t sunny, check the North Coast, as the weather can be quite different on the two coasts.

Many of the beaches in Cornwall have man made caves, which are often left over from mining exploration over the last few centuries. Some of these caves can be followed for miles, but you’re better off imagining what it’s like over finding yourself waist deep in water in the pitch black…

Which are the best sandy beaches in Cornwall?

Cornwall has an abundance of natural sandy beaches, with some of the best considered to be Kynance Cove, Whitsand Bay and Godrevy Beach. However, there are so many beaches, most of them rarely visited because they are difficult to access or very small. Mevagissey has many glorious sandy beaches nearby, with Pentewan, Carlyon Bay and Gorran Haven all having whitish to golden sand.

What are the best walks near Mevagissey?

There are many walks around Mevagissey. There’s a pleasant and green walk to Heligan gardens, which begins just outside the village. You need to walk past the large car park, then follow signs to “Cycle Route 3” or the Footpath signs to Heligan. The walk is uphill, has a stream and is through woodland. The route is circular so you can return back to where you started.

How do I get onto the Pentewan to Mevagissey Coastal Walk?

The Pentewan to Mevagissey coastal walk begins on the foot path close to the museum, and takes you up a series of stairs, across a small green opening, past Polstreath beach and then along a nice wild stretch of coast. The walk is 2.3 miles of up and down along stunning coast line. You can take a bus to return back to Pentewan.

The Mevagissey to Portmellon and Chapel Point Coastal Walk

The walk over the hill towards Portmellon is short, and takes you to a cluster of houses by an idyllic beach. If you keep walking along the road through Portmellon however and bear left, you’ll find yourself on a green footpath towards Chapel Point. This is a beautiful walk which leads to a field leading down to a private beach with a hut on it.

The beaches around Mevagissey often have resident Grey Seals. These dog-like creatures have a surprisingly large presence, especially when a lardy male cruises along the harbour wall on a clear day, and you can see their full size. Beautiful creatures that lead mysterious and seemingly lazy lives, I think of all the sea life you might encounter, seals are the most relateable. You can see why the Scottish have their myths of Selkies – creatures that can change form from man into seal… If you’re a fisherman, seals are a less welcome sight, as fish tend to hide or disappear when a seal is on the hunt in the area (the same is true of cuttlefish and squid, which are surprisingly formidable predators if you’re a fish).

If you venture along the Eastern coast path out of Mevagissey, you’ll walk past Polstreath, Pentewan, and then a more dramatic area of coastline leading up to a headland called Black Head. This rugged outcrop has few visitors and you can walk right around it, or venture down one of the thin, cliff side paths to the rocky shore. I know a man that watched a Smooth Hound (a harmless species of cat shark) swim within meters of the shore here, so be sure you understand who owns the place! There are thousands of bullets a few inches deep in the soil all over the headland, from the old shooting range used in WWII, and a memorial to A.L. Rowse, the Cornish writer who lived in the nearby village. You might bump into some bird watchers looking at something you’ve never heard of in the distance. Rare bird of prey are sometimes sighted.

And finally, for those of you with furry friends, here is a list of dog friendly beaches: